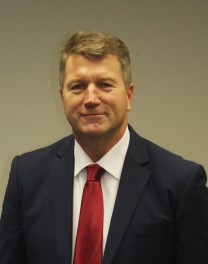 Todd Nehls has served in the field of law enforcement for 35 years, the last eleven as the elected Sheriff of Dodge County retiring in 2013.  Todd holds a bachelors of arts in Criminal Justice and a masters of arts in Management and Organization Behavior.

Key assignments include Commander – Wisconsin’s Airport Security Mission post-911and 15-month deployment as a Senior Military Advisor to the Afghan National Army.  Colonels Nehls’ awards and decorations include the Legion of Merit, the Bronze Star, and the Army Commendation Medal with “V” device.  In October, 2019 Colonel Nehls was inducted into the Wisconsin National Guard Hall of Honor.

Todd lives with his wife Susan, in Fox Lake, Wisconsin, and they have two sons, Derrick and Taylor.  His post retirement activities include grandchildren, golf and the family’s real estate business.